While the COVID-19 virus has not been reported to have hit Puerto Vallarta, we are all reading the news and know that other viruses are alive and well in paradise.  During this time of the year it is quite common for people to contract the flu, pneumonia, or any other type of respiratory disease.  Please use the following common sense when deciding to attend a social event.

As of the writing of this March ENewsletter, ANA will not hold its social events until allowed by City and State officials.  We are following the request by the Jalisco governor to stay home for five days, which would be until Wednesday, March 25th.  Please exercise good hygiene and make good decisions.

Membership is the backbone of our financial planning and the reason why ANA is strong and effective.  In 2019 we had 17 full building members (207 units) and approximately 60 individual members.

We begin 2020 Membership with a significant increase in full building membership (FBM).  ANA now has 20 FBM buildings which represents 295 units.  This is a 30% increase!  Why are buildings joining ANA?  After November’s President’s Reception & MÁS event ANA experienced an increased interest in our work, especially as it was outlined in ANA’s Five Year Plan.  Through the document, ANA was able to demonstrate to our community that we are committed to taking care of our neighborhood and that we listen to what our community tells us. 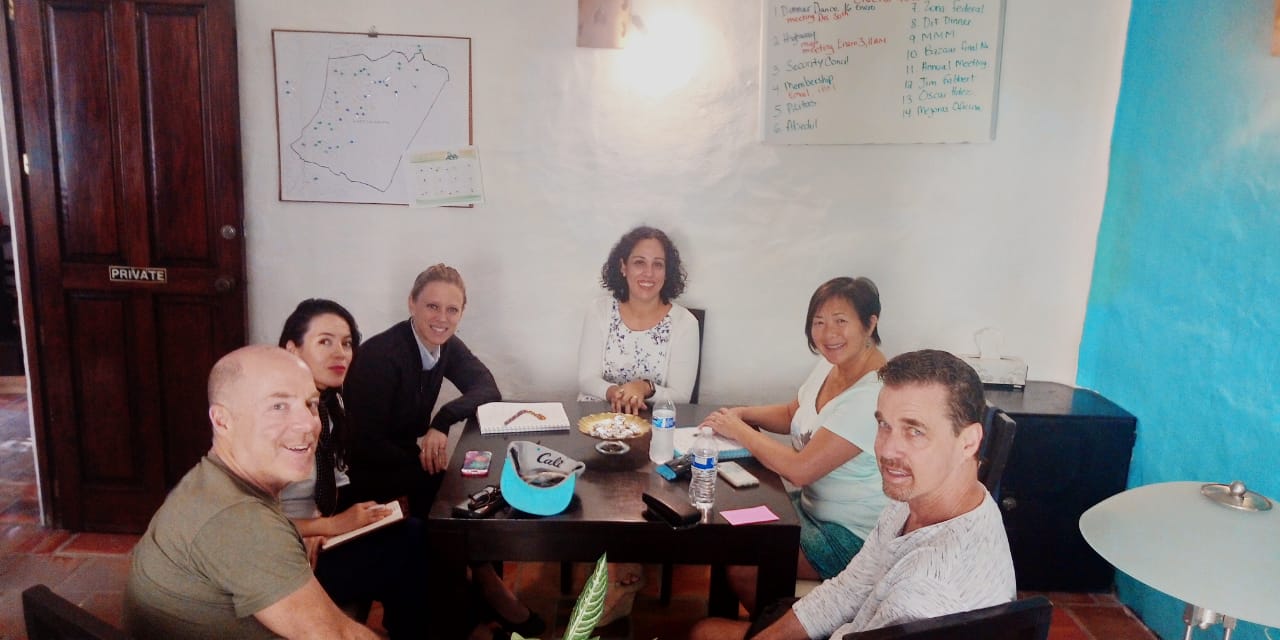 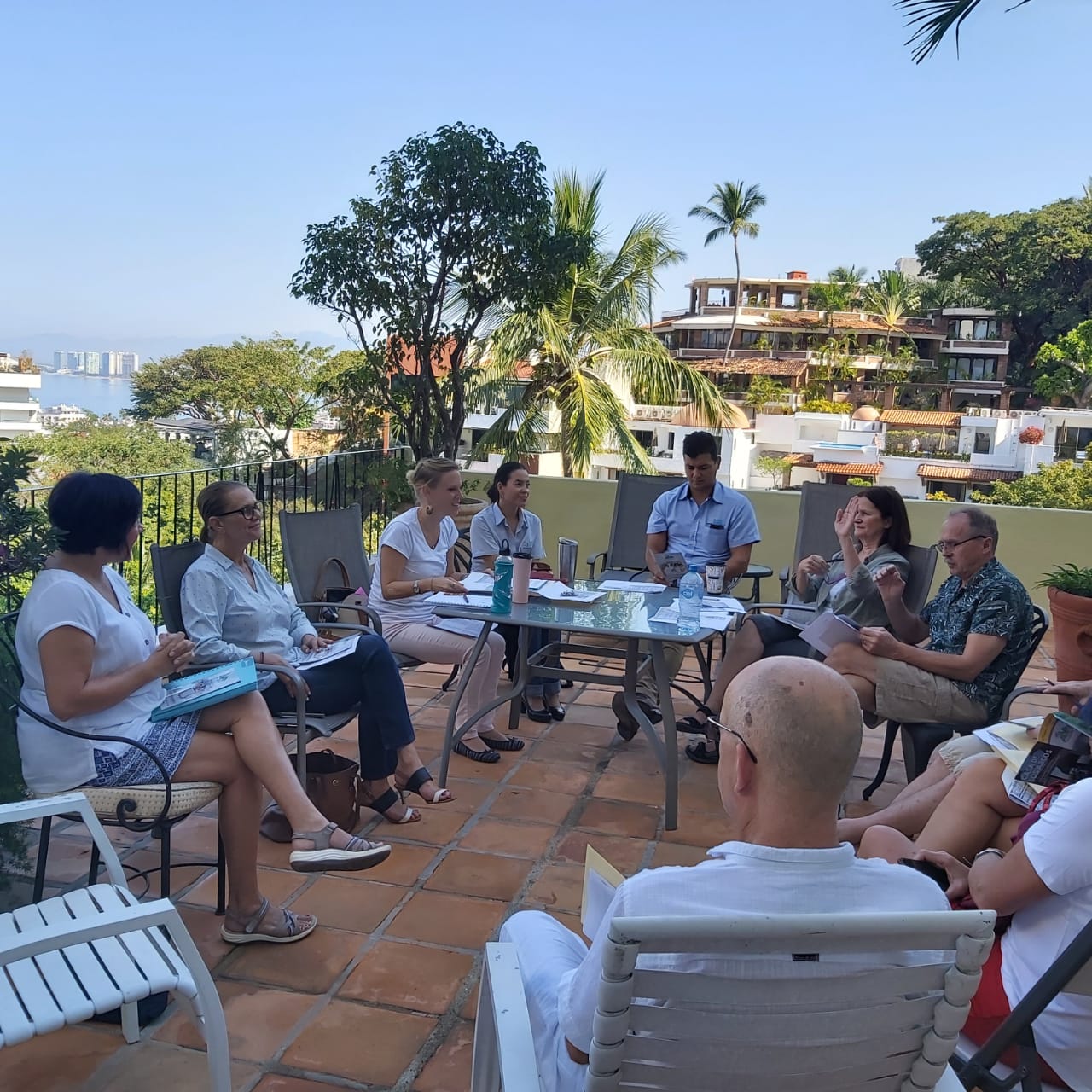 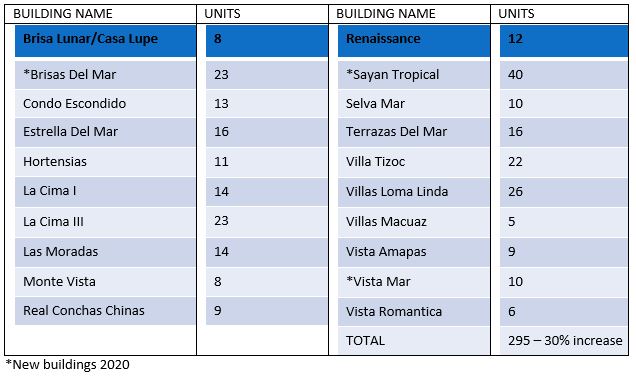 Here’s the rationale for the increase.

Interested in knowing more about ANA – Contact info@amapaspv.com to schedule a presentation for your building or an individual appointment. 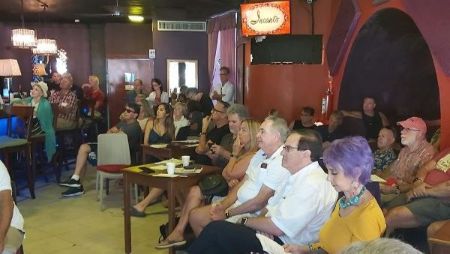 The Amapas Neighborhood Association (ANA) held its annual general meeting (AGM) at Incanto’s piano bar on February 20, 2020.  Even though no one sang, it was a great setting for our group of about 30 people.  Everyone was able to hear each other and look into each other’s eyes.  The intimate setting allowed everyone to hear and see who was speaking.

Here are the 2019 highlights from this year’s AGM.

ANA held monthly Meet and Greets throughout the Amapas community.

On average 30 members attended, even during the summer months.

We distributed ANA’s Five Year Plan which laid out our work and vision for 2019 and beyond.

ANA’s Board for 2020 will be:  Sylvia Toy (president), Robert Howell (secretary), Steve Clarke (treasurer), Don Pickens (vocal), and Robin Spencer (vocal).  There are two openings which will be filled at a later date.

What?  Don Pickens isn’t treasurer anymore?  For two years Don has been joking and pleading for someone else to take on the treasurer’s responsibilities.  Many things happened during those two years.  Don was hit by a taxi.  Tom passed away.  Sylvia became president and life moved on.  Don is staying on the Board, but he will focus on fundraising.  This is something he has wanted to do for some time.  Steve Clarke, former president at Villas Loma Linda, will be working with Don to learn all the particulars of working a business in Mexico.  So, don’t worry, folks.  Don is still a part of the Board and he has someone very capable to teach.

Responsibilities were divided amongst the Board members as follows:

Continue vigilance on developments in the Amapas zone:  Serena, Gardenias 215, and The Creek.

Obtain commitment from City to increase service to Amapas Zone

Members Only Q & A sessions on topics of member interest 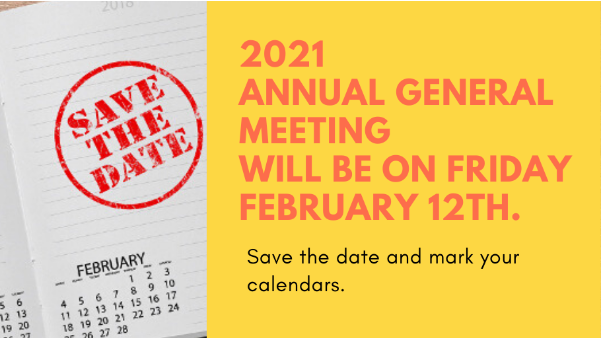 Fifteen percent of ANA’s membership responded to the survey.  In general, most of us don’t know a lot about our water supply.  Additionally, there are very few credentialed individuals who will go on record to give us answers.  It puts ANA in a strange position, because while we don’t want to contribute to rumors, we also don’t want to withhold credible information.  That is why the next steps are critical in coming up with good, solid information. 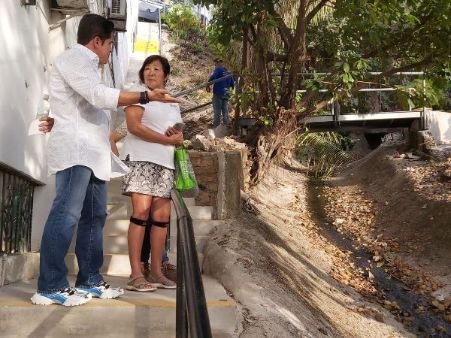 The Almar Hotel is located between Calle Amapas and Calle Santa Barbara.  Owned and operated by brothers Alejandro and Vidal Meza, these two men bought a property and recreated it for a new clientele.  As a result of their investment into the community, they have brought jobs and people into this section of Amapas.

Recently, President Toy and Viviana Testón, ANA Administrator, met with Alejandro Meza and his architect to discuss concerns about the new expansion occurring on the property.  First, their target is to finish by year’s end, because they already have rented rooms in their new additions.  That’s a relief to all, because constant construction noise is difficult to bear.  Secondly, construction only occurs between 10 and 7, Monday – Saturday.

They are doing their best to be responsible neighbors.  In an effort to provide a safe environment for their workers, they constructed a temporary bridge between the top of the project (near Calle Amapas) and existing stairs.  Concerns were voiced to ANA over this action, because the bridge crossed over land that is not part of the Almar project.  It is temporary and will be removed once construction is complete.

Speaking of the stairs – These run between Calle Amapas and Calle Malecón.  As part of the Almar project, the Meza brothers fixed these crumbling stairs to make them safer and more stable.  They have also added lights so evening travelers can see where they are stepping.

ANA is vigilant about ensuring responsible development occurs within our colonia.  None of us enjoy losing our precious views of the Banderas Bay, so ANA works with developers to ensure they are following the Plan Parcial which specifies height and density restrictions.  Almar is doing so and contributing to the community.

Almar will continue to notify ANA when parties occur at their Sky Bar that are outside of City specified noise limits.  ANA’s relationship with Almar and the Meza brothers is an example of a positive working relationship with the businesses in the Amapas colonia.

A summary of the meeting held on Wednesday, March 4th has been distributed to all ANA members.  On March 11th another meeting was held for those who wished to learn more about the Traffic Calming Initiative.  Two people attended.  A road trip will occur sometime in April for interested members to see and experience a variety of topes, vibradores, and dead-placement options.  The item that generated the greatest interest was a tope-crosswalk combination.  This would reduce the amount of interventions, cost less, and cause less noise to be generated.  We’ll see!

ANA’s Traffic Calming Initiative Version 1.0 received City approval.  By making changes, we need to have another meeting in April with Police and City to discuss Version 2.0.

“High and fine literature is wine, and mine is only water; but everybody likes water.” (Mark Twain)

Everybody needs water!  We have been fortunate in Puerto Vallarta, that until recent years we have had a sufficient supply of tap water, and the sewage system, has somewhat kept working. ANA has taken on the task of seeking a transparent report from officials of the plan for infrastructure to keep up with significant development in our city. As reported at our General Meeting, we have received validated reports of both water shortages and sewage spills in Puerto Vallarta. Our eyes see the rapid development of vertical buildings and increased tourism.

Our members reported a lack of knowledge of our water sources, and sewage disposal system in a recent survey conducted by ANA. Our members want ANA to work with the city in obtaining a transparent plan to address the infrastructure of water systems: tap and sanitation.

We are heartened to learn that we now have other entities acknowledging our members´ concerns.

Although these headlines are indicative of a broader acknowledgement of the potential problems in Amapas and the city as a whole, it is the Obligation of ANA, through its members and the AMAPAS Vecinal to seek a transparent plan from city officials.  This effort is both time consuming and costly as we seek professional consultation in identifying the specific needs of the Amapas Zone, which likely reflect the needs of the city as a whole.  As stated at the General Assembly, by Robert Howell, Secretary, and others this is a concern for all residents in Amapas, but paid members are bearing the burden of the non-members of Amapas. Please encourage non-members to join and assist with this initiative.  The infrastructure team of ANA will keep membership informed as we continue to move forward!