Puerto Vallarta’s historic City Hall (aka La Presidencia) came alive on Saturday, November 30th with the fourth Mariachis, Margaritas, and More event.  This is a fundraising event where ANA works collaboratively with another neighborhood association – Viejo Vallarta.  It’s one of ANA’s annual fundraiser events where we highlight the best and diverse food offerings in Puerto Vallarta.

This year’s event highlighted the sounds and entertainment of Vallarta’s children.  We were amazed by the depth and quality of the singing voices and style of the Raices Jalicienses Mariachi group.  Their renditions of traditional Mexican songs was heart-felt and absolutely amazing.  How lucky we were to have these young musicians entertain us!

Delicious food was provided by the following restaurants. 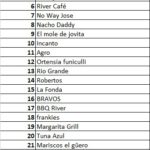 Following dinner we were then entertained by the ballet folklorico group Tradiciones.   The tiny little three-year-old girl stole everyone’s hearts as she danced and pranced with her colorful skirt about the stage.

The night ended with the dancers coming off into the audience and grabbing willing and unwilling participants to dance with them.  What a night and celebration!

The Amapas Junta Vecinal is official!

Voted in by nearly 30 people in attendance the Amapas Junta Vecinal is now official.  This was the first time all of us had experienced this very formal process and we had no idea what to expect.  The City provided chairs so we could sit in the parking lot in front of the ANA office on Thursday, November 21st.  We are glad to report that no one was injured by oncoming traffic or being hit on the head by falling fruit.

The officers of the Amapas Junta Vecinal are as follows:

What does the Junta do versus the Amapas Neighborhood Association (ANA)?

As we took our oath to ensure that we would honor the will of the people of Amapas, we used the Bellamy salute, which is the salute used in Mexico.

Here’s a little history lesson from Wikipedia.  The Bellamy salute is a palm-out salute described by Francis Bellamy, the author of the American Pledge of Allegiance, as the gesture which was to accompany the pledge. During the period when it was used with the Pledge of Allegiance, it was sometimes known as the “flag salute”. Both the Pledge and its salute originated in 1892.  Later, during the 1920s and 1930s, Italian fascists and Nazi Germans adopted a salute which was very similar.

Inside the lush garden patio of the boutique hotel of Villa Mercedes ANA held its President’s Reception and MÁS on Wednesday, November 20th.  Delicious tapas were served by eclecticos restaurant.   Friends, neighbors, and movers and shakers (MÁS) gathered to hear about ANA’s Five Year Plan.

Thanks Oscar Moran, ANA Board member and owner of Villa Mercedes, for inviting ANA into your secret garden.  Thanks Natalie Hartling, ANA member and business sponsor, for providing us with tasty tapas from eclecticos.

The presentation by President Sylvia Toy created a picture of what ANA will be working on for the next five years.

Here’s the link so you can see it online.  (Amapas 5 year Plan)

Here’s an overview of the first two years.

Some believe it is an exercise in futility to plan in Mexico.  However, we cannot be so frivolous to pursue only those projects that pop up in front of us on a daily basis.  We need to know where we’re headed otherwise any road will do.  For those of us who have lived here in Puerto Vallarta for any length of time the needs are clear – street repairs, lighting, signage, trash cans, pedestrian safety, narrow roads, home and personal safety, clean beaches, and addressing irresponsible development.  Those are the areas focused upon in the Five Year Plan.  What’s different, is that ANA has identified what we can accomplish each year and the interagency connections we need to make to sustain them.   In and of itself, the Five Year Plan is a written document that helps ANA and its members see what ANA will be focused upon and what our work is.  In other words, this should answer the question of “What has ANA done for me lately?”

Will we adjust based on new information?  Of course we will!  Any good plan must adjust based on new circumstances and quality information.  If you’ve ever seen the Disney movie “Up,” you’ll recall the scenes where the dog sees a squirrel.  SQUIRREL!  Immediately the dog’s attention is distracted and the dog chases the squirrel.  Unlike the dog, ANA wants to stay focused on those things our membership has  identified as their priorities.  The Five Year Plan helps us maintain that focus.

Much of the groundwork for the Five Year Plan took place last year.  We began with the ANA Survey then details were added during the President’s Round Table.  Later the ANA Board filled in the details with observable and measurable yearly objectives.

ANA Board members addressed the nearly 60 attendees to share their perspective.  It was a great way for our members to get to know them.

The reception was a huge hit.  The room was filled with dreams, possibilities, and a plan on how to achieve them.  Positive energy filled the room.  We were also successful in adding two new buildings – Vista Mar and Condo Amapas – as full building members.  There are positive signs for three other buildings and more individuals to join, as well!   In addition to increased membership, ANA increased its volunteer network and the number of people who can speak to others about what ANA does.  We have more key communicators, ANA Ambassadors, on the ground.  It’s not just the Board who have all of the information about how the money will be used.  Everyone in attendance heard our truth – our plan.

The question always remains, “How do you fund dreams and possibilities?”  ANA must fundraise.  See previous article, “Why Does ANA Have So Many Parties?”  We hope to see many of you at January’s Dinner Dance focused on the 60’s which will be our last fundraiser for this season.

WHY DOES ANA HAVE SO MANY PARTIES?

On occasion this question has been asked.  This topic was addressed by President Sylvia Toy at the President’s Reception and MÁS event held on November 20th.   Let’s connect some dots to assist in clarifying how ANA works with our members and potential members.

Individual memberships are 1500 pesos per unit.  Full building memberships are 1300 pesos per unit.  These funds are not sufficient to cover ANA’s basic operations which include salaries for two individuals, office rent, office utilities, highway maintenance (paint and plant growth trimming), fixing potholes and other street repairs) at an annual cost of about $37,000 USD (684,500 pesos at 18.5 exchange rate).

So, how does ANA get the money to cover its basic operations AND do everything it does?

DOT #2:   ANA RAISES FUNDS!!  We sell memberships and advertising in our Business Brochure.  We organize fundraising events – Mariachis, Margaritas and More, Annual Dinner Dance, and this year’s Holiday Bazaar.  Yes we want them to be interesting and exciting so ANA members and others want to attend and have a good time.  Who wants to go to a dull, boring party?  For the past couple of years we’ve also conducted the ANAual Giving event for those who want to do a donation not associated with an event.

DOT #3:  THERE ARE LOTS OF ORGANIZATIONS IN PV COMPETING FOR FUNDS.  If you’ve spent any time in Vallarta you know that there are many charitable events and lots of groups asking for money.  ANA is one of those groups and you directly benefit from your contributions.  How?  Private donations brought you the highway sidewalk.  It’s safer to walk to and from the beach and downtown.  Oh, but you only drive?  How many renters also rent a car?  Not many.  The highway sidewalk makes it safer for them to get about town and you get to advertise on your rental site that your location is conveniently walkable.  The sidewalk is also an attraction for others looking to purchase your condo.  It makes our neighborhood accessible and attractive.  Additionally, the sidewalk is used twice daily by our Mexican National neighbors, maids, workers, and friends to go to and from work.  The sidewalk was a great way to give back to our community!

DOT #4:  ANA BUILDS COMMUNITY.  But let’s get back to ANA’s parties.  Monthly ANA holds a Meet and Greet at one of your neighbor’s residence.  They open their home up for ANA members to get to know each other and hear the latest news.  This monthly event is one of the most significant differences between ANA and other neighborhood associations – we create community.  ANA members know each other.  They become friends and acquaintances.  They learn about what makes us similar as we navigate our lives here in paradise.  And why is it important to know your neighbors?  Neighbors who know each other experience less crime.  Neighbors look out for each other.

So, next time someone asks you why does ANA have so many parties, we hope that you too can answer their question and connect the dots.